Once again I’ve allowed the list of things I want to blog about to pile up, have been focusing writing energies elsewhere, and now haven’t blogged in well over six months. C’est la vie!

What I want to post here is an issue I ran across in August, when I was attempting to refactor some OCaml code. Javier had asked me to split out an embaressingly long module into smaller ones and I know I had a reason for not doing so, but I couldn’t remember it. This post is a summary of me re-discovering why I hadn’t done it originally and how part of the rationale was based on a flawed understanding of oasis.

The original code had one big file that contained many modules. The interface file exported most of those modules. However, the oasis file only contained the top-level module (i.e., the .ml file) in the list of modules. When I separated the module into many sub-modules, I updated the oasis file to only list modules that would be used by the other libraries. Now why would I do this? Isn’t oasis just a build system? Well, to be honest, I suppose I was also thinking about it as a way of specifying what to export. Yeah, yeah, I’m a dumb dumb who should RTFM or something. Now that we have that out of our system, let’s look at some behavior that I at least found to be unexpected (and since I’m not a terrible programmer, I assume others might make the same mistakes):

1. Assertion 1: If oasis is “just” a build system, I would expect a different error from what I actually get.

Here is the setup: I have 12 modules whose dependencies form a DAG inside one master file that I would like to split out into 12 individual files: 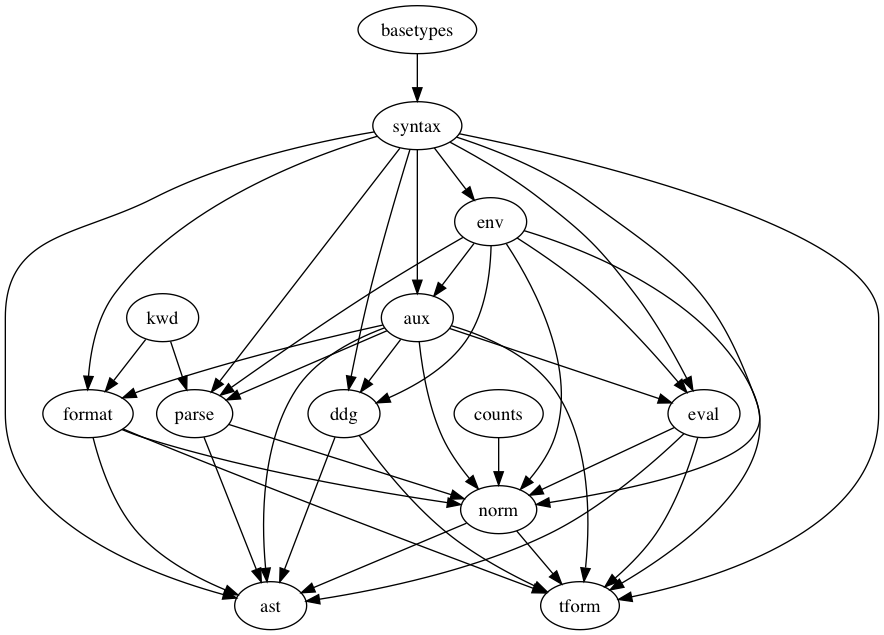 …and if you want an easier-to-read representation of the dependencies, check out this rendering: 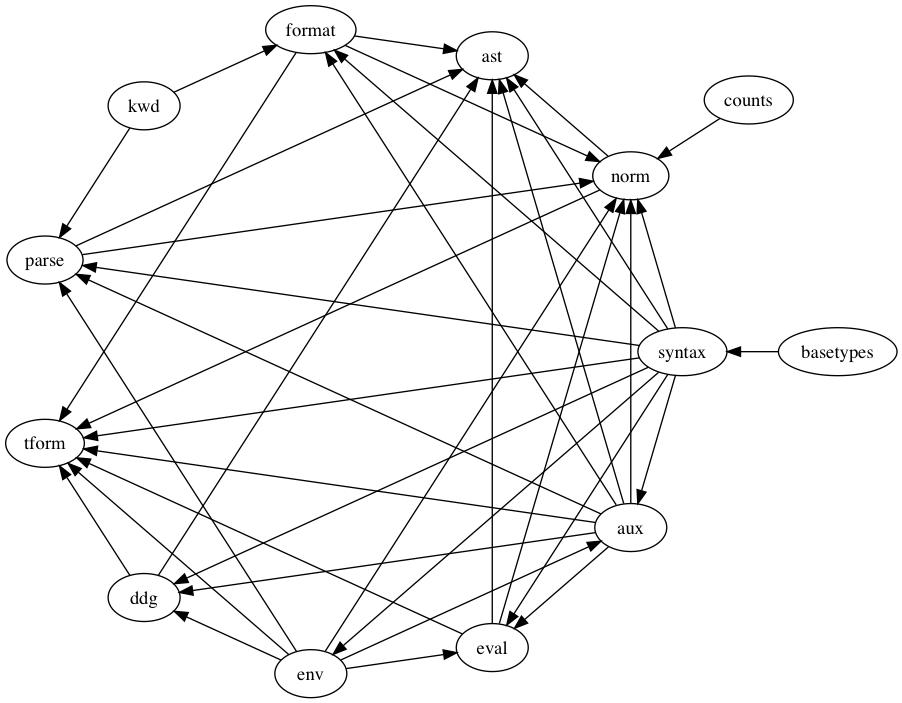 When I originally split these out, as previously stated, I only included the modules actually used by other libraries or executables. Although at the moment I can’t remember what exactly those were, I can reproduce the error I got by not including the Parse module, which is not used outside the src_lang library, in the list of modules in the library:

I want to note two things here: (1) It’s not that every dependency is required – when I exclude the Kwd module and the Counts module from the list of library modules, this does not trigger the error, and (2) if the issue were that some dependency was missing or that a linker had an error, wouldn’t it give a different error? The error Ocaml gives when I don’t have the proper dependencies is pretty clear.

So where does this circular dependency error come from? Clearly oasis is doing some kind of inference over the module dependencies and inferring that there’s a cycle when there isn’t.

2. Can we induce this error with a simpler structure?

I’d like to recreate a similar module structure to what I had previously. However, I started with something simple:

We would like to split into separate files: some_lib/A1.ml, some_lib/A2.ml, and some_lib/A3.ml. We also include the interface files, since without them I get some error about “making inconsistent assumptions over interface Pervasives.”

In my main executable, which I’ve creatively called main.ml, I have:

I then update my _oasis file to so that the some_lib library entry looks like this:

However, when I run oasis setup && make, I do not get the error I’m trying to induce. This shouldn’t be totally surprising – my earlier comment about not needing to include, e.g. the Kwd module indicated that the problem is probably more subtle than just including all of the dependent modules. Some notes about the module dependency structure that caused the circular dependency:

Point (4) is something I want to look at more – the actual error message does not say where the duplicate src_lang.cmxa dependence arose – only that it was previously seen in the Aux module. Inside _build/_log there are a bunch of commands. First I looked for the one that built aux.cmx:

This looks pretty boring/innocent. There’s a call to build src_lang.cmxs that basically looks the same, i.e. not too promising for debugging purposes. There are no other calls to src_lang.cmx. So basically this feels like a dead end.

So now let’s get back to figuring out if we can induce this error using a simpler dependency graph. The module dependencies

didn’t trigger our error. In this scenario, A2 is analogous to Parse. Let’s give it another parent, and make that parent an inner node:

We keep the oasis file the same, and just update the codebase so that A2.ml calls a function from A5.ml, and A5.ml calls a function defined in A4.ml. Unfortunately, I still can’t induce the error. It’s possible that the function definitions, which are all just the identity function, are too simple and are processed in a way that that makes inference easier. However, I still don’t know what caused the erroneous circular dependency issue and will post updates if if comes up again or if I figure this one out!